(The saying goes “leave the best for last”. St. Patrick in the patron saint of our church and with him we close the tour of the parish gardens. The next 6 days we will reflect on different facets of our Patron Saint. Enjoy the history, culture, spirituality, and music of these next days.) 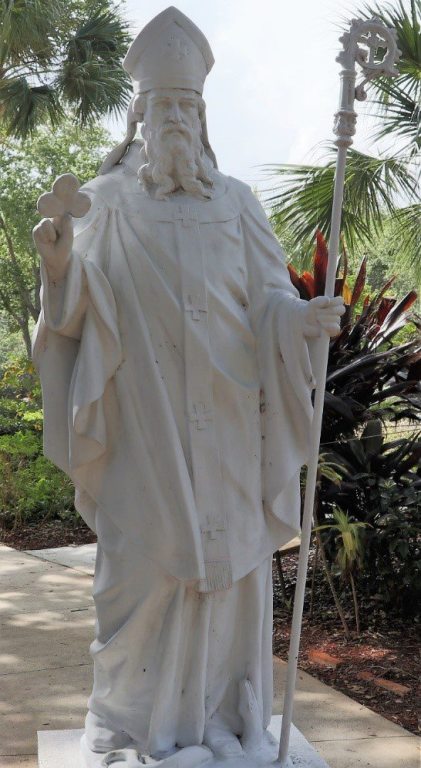 We finish the Virtual Garden with our parish patron Patrick of Ireland.

Apostle of Ireland and Nigeria (because so many Irish missionaries converted  the Nigerian people to Catholicism) , born at Kilpatrick, near Dumbarton, in Scotland, in the year 387; died at Saul, Downpatrick, Ireland, 17 March, 493. Some sources say 460 or 461. --Ed.

He had for his parents Calphurnius and Conchessa. The former belonged to a Roman family of high rank and held the office of decurio in Gaul or Britain. Conchessa was a near relative of the great patron of Gaul, St. Martin of Tours. Kilpatrick still retains many memorials of Saint Patrick, and frequent pilgrimages continued far into the Middle Ages to perpetuate there the fame of his sanctity and miracles.

In his sixteenth year, Patrick was carried off into captivity by Irish marauders and was sold as a slave to a chieftan named Milchu in Dalriada, a territory of the present county of Antrim in Ireland, where for six years he tended his master's flocks in the valley of the Braid and on the slopes of Slemish, near the modern town of Ballymena. He relates in his "Confessio" that during his captivity while tending the flocks he prayed many times in the day: "the love of God", he added,

and His fear increased in me more and more, and the faith grew in me, and the spirit was roused, so that, in a single day, I have said as many as a hundred prayers, and in the night nearly the same, so that whilst in the woods and on the mountain, even before the dawn, I was roused to prayer and felt no hurt from it, whether there was snow or ice or rain; nor was there any slothfulness in me, such as I see now, because the spirit was then fervent within me. 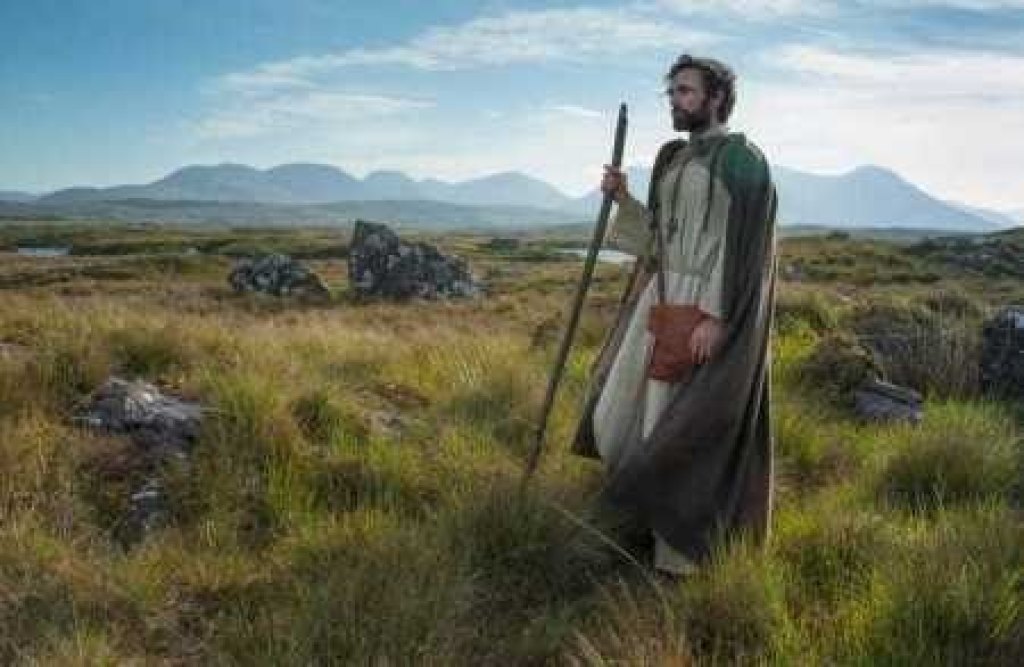 In the ways of a benign Providence the six years of Patrick's captivity became a remote preparation for his future apostolate. He acquired a perfect knowledge of the Celtic tongue in which he would one day announce the glad tidings of Redemption, and, as his master Milchu was a druidical high priest, he became familiar with all the details of Druidism from whose bondage he was destined to liberate the Irish race.

Admonished by an angel he after six years fled from his cruel master and bent his steps towards the west. He relates in his "Confessio" that he had to travel about 200 miles; and his journey was probably towards Killala Bay and onwards thence to Westport. He found a ship ready to set sail and after some rebuffs was allowed on board. In a few days

he was among his friends once more in Britain, but now his heart was set on devoting himself to the service of God in the sacred ministry. We meet with him at St. Martin's monastery at Tours, and again at the island sanctuary of Lérins which was just then acquiring widespread renown for learning and piety; and wherever lessons of heroic perfection in the exercise of Christian life could be acquired, thither the fervent Patrick was sure to bend his steps.

No sooner had St. Germain entered on his great mission at Auxerre than Patrick put himself under his guidance, and it was at that great bishop's hands that Ireland's future apostle was a few years later promoted to the priesthood. It is the tradition in the territory of the Morini that Patrick under St. Germain's guidance for some years was engaged in missionary work among them. When Germain commissioned by the Holy See proceeded to Britain to combat the erroneous teachings of Pelagius, he chose Patrick to be one of his missionary companions and thus it was his privilege to be associated with the representative of Rome in the triumphs that ensued over heresy and Paganism, and in the many remarkable events of the expedition, such as the miraculous calming of the tempest at sea, the visit to the relics at St. Alban's shrine, and the Alleluia victory.

Amid all these scenes, however, Patrick's thoughts turned towards Ireland, and from time to time he was favored with visions of the children from Focluth, by the Western sea, who cried to him: "O holy youth, come back to Erin, and walk once more amongst us."

Pope St. Celestine I, who rendered immortal service to the Church by the overthrow of the Pelagian and Nestorian heresies, and by the imperishable wreath of honor decreed to the Blessed Virgin in the General Council of Ephesus, crowned his pontificate by an act of the most far-reaching consequences for the spread of Christianity and civilization, when he entrusted St. Patrick with the mission of gathering the Irish race into the one fold of Christ. Palladius had already received that commission, but terrified by the fierce opposition of a Wicklow chieftain had abandoned the sacred enterprise. It was St. Germain, Bishop of Auxerre, who commended Patrick to the pope. The writer of St. Germain's Life in the ninth century, Heric of Auxerre, thus attests this important fact: "Since the glory of the father shines in the training of the children, of the many sons in Christ whom St. Germain is believed to have had as disciples in religion, let it suffice to make mention here, very briefly, of one most famous, Patrick, the special Apostle of the Irish nation, as the record of his work proves.

Subject to that most holy discipleship for 18 years, he drank in no little knowledge in Holy Scripture from the stream of so great a well-spring. Germain sent him, accompanied by Segetius, his priest, to Celestine, Pope of Rome, approved of by whose judgement, supported by whose authority, and strengthened by whose blessing, he went on his way to Ireland." It was only shortly before his death that Celestine gave this mission to Ireland's apostle and on that occasion bestowed on him many relics and other spiritual gifts, and gave him the name "Patercius" or "Patritius", not as an honorary title, but as a foreshadowing of the fruitfulness and merit of his apostolate whereby he became pater civium (the father of his people). Patrick on his return journey from Rome received at Ivrea the tidings of the death of Palladius, and turning aside to the neighboring city of Turin received episcopal consecration at the hands of its great bishop, St. Maximus, and thence hastened on to Auxerre to make under the guidance of St. Germain due preparations for the Irish mission.