(We now continue our tour of the Parish gardens. In the past days before Holy Week we have journeyed with St. Brigid, The Holy Family, Padre Pio, and Katherine Drexel. In the next three days we will reflect on the image of the Sacred Heart of Jesus.) 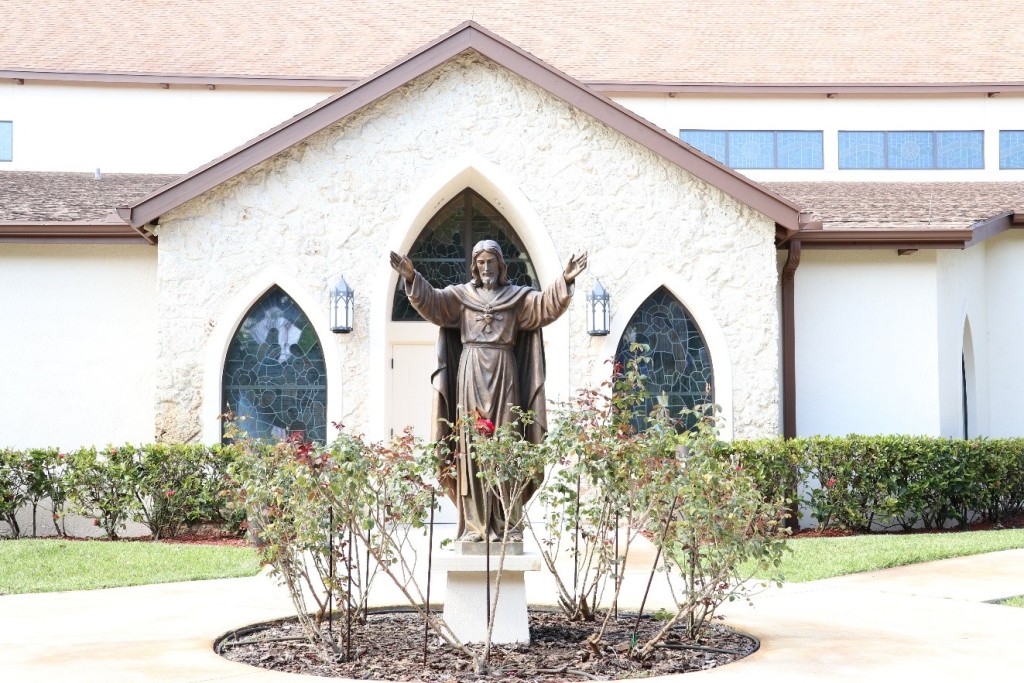 We had a large framed picture of the Sacred Heart in our house, in front of the picture was a red-light bulb in the shape of a cross. It looked something like this.

My mother used to sing this hymn as she worked around the house, when I looked for this video online I had not heard or sung in YEARS, but as soon as I heard the first notes

every word came flowing back to me. 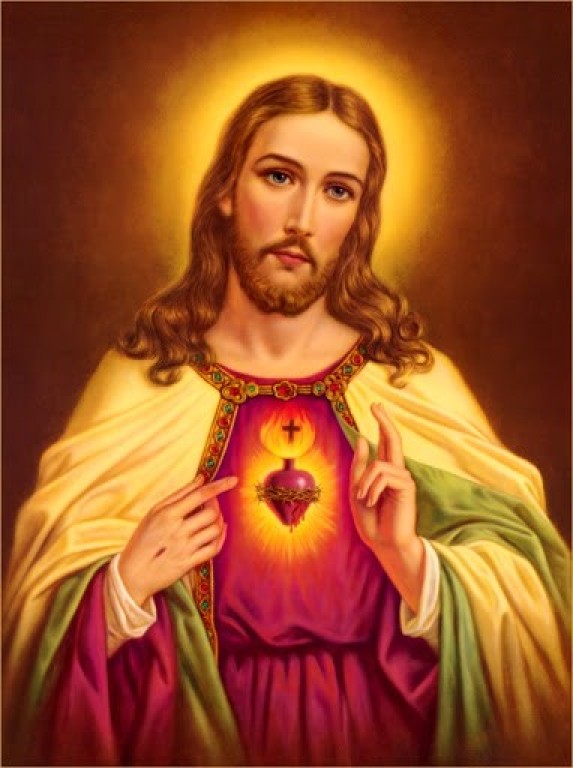 While Mum had great devotion, I have to confess………

It did not inspire devotion in the hearts of my brothers and myself, probably because

If we did something wrong my Mother would pull us in front of the picture in an effort to confess our misdeeds and then make a promise in front of the Sacred Heart to change our error filled ways.

So, the primary emotions growing up that I associated with the Sacred Heart of Jesus was

I have to say when Dad died a few months ago and my siblings and nephews were clearing out the contents of the house in Ardbeg Park there was NO ONE fighting for that particular picture (although it found a good home JUST NOT with the Lacy boys !!)

So, when I came across the history of the devotion to the Most Sacred Heart of Jesus, I was genuinely surprised. It was as far removed from that toxic list I shared, as far removed, as the East from the West. As far removed as the earth is from the sun.

To understand the Sacred Heart, one must first understand the life of the woman who helped bring this gift into the mainstream of the Church, one Margaret Mary Alacoque 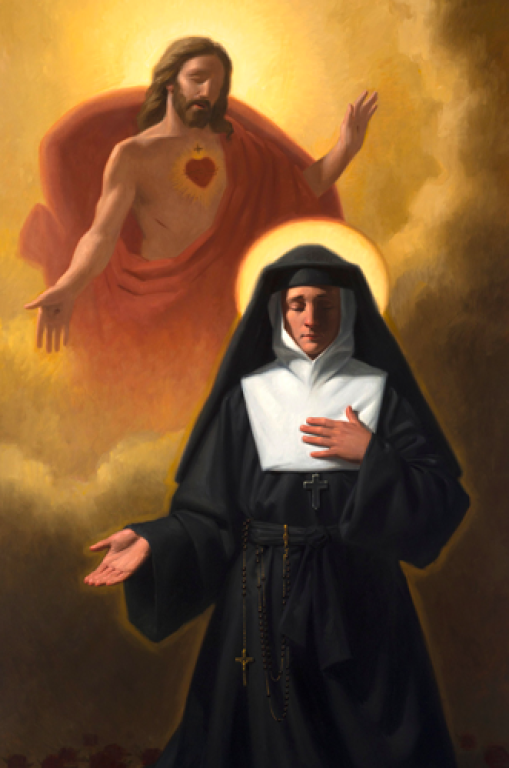 Every liturgical year on the third Friday following the great feast of Pentecost, we celebrate the solemnity of the Sacred Heart of Jesus. The heart has always represented the whole person, and the heart of Jesus is the symbol of his eternal love for us. The solemnity is our opportunity to acknowledge his love and offer repentance for the times when we have ignored his affection. It was a young nun named Margaret Mary Alacoque of the Visitation order at Paray-le-Monial, France, who would become Jesus’ conduit to spread devotion to the Sacred Heart throughout the Roman Church. This is an ancient devotion that began when the Roman soldier stuck his spear into the side of our crucified savior and God’s grace, in the form of water and blood, flowed from his side, from his heart. Saints, theologians, writers and individuals have long recognized the Sacred Heart as the source of endless blessings, mercy and love. But for centuries it was mostly a personal devotion. In the 17th century, Catholicism was under attack from the spread of Protestantism and the heretical beliefs of Jansenism. The Jansenists, who were Catholics, claimed that only a chosen few people would reach heaven and that God was to be feared. They degraded the humanity of Jesus, including his heart, and wanted the Church to return to rigorous penances of the past. Both Protestantism and Jansenism impacted the fervor the faithful had for many Church teachings, including devotion to the Sacred Heart of Jesus. Jesus would confront this falling away through Sister Margaret Mary.

Beginning in 1673 and over a period of more than 18 months, Sister Margaret Mary claimed to have received visions during which our Lord Jesus displayed his Sacred Heart as the symbol of his love for mankind and told Sister Margaret Mary that she was to be his instrument to spread a universal devotion to his divine heart.

In one vision, Jesus appeared with his “divine heart, enthroned, as it were, in flames, was surrounded by a crown of thorns, and the wound it had received was still open, while a cross more brilliant than the sun, surmounted all” (“The Beauties of the Catholic Church,” F.J. Shadler).

According to Margaret Mary, Jesus told her that despite loving mankind so much that he gave his life for them, he was being treated with irreverence, coldness and ingratitude. He wanted the world to recognize the love he continually poured out for them symbolized by his Sacred Heart and for mankind to make amends for their ingratitude.

He urged Sister Margaret Mary to begin a personal devotion to his divine heart by receiving Holy Communion every first Friday and spending an hour in prayer the night before, both focused on seeking his pardon and making prayerful reparations for mankind’s desertion of his love.

In another vision, Jesus asked her to establish a Church feast day to honor his Sacred Heart, one to be held on the third Friday following Pentecost. On that day, those faithful to Jesus would attend Mass, receive Holy Communion, profess their love and offer reparations for the way he had been insulted by mankind. These visions are the basis for the first Friday devotions and the solemnity of the Sacred Heart of Jesus we have today. The love and compassion of Jesus’ heart dispels the heresies of Jansenism.

When Margaret Mary first attempted to explain the visions, many around her were skeptical. It was St. Claude de la Colombiere, her spiritual adviser, who recognized the holiness, fervor and sincerity of Margaret Mary. 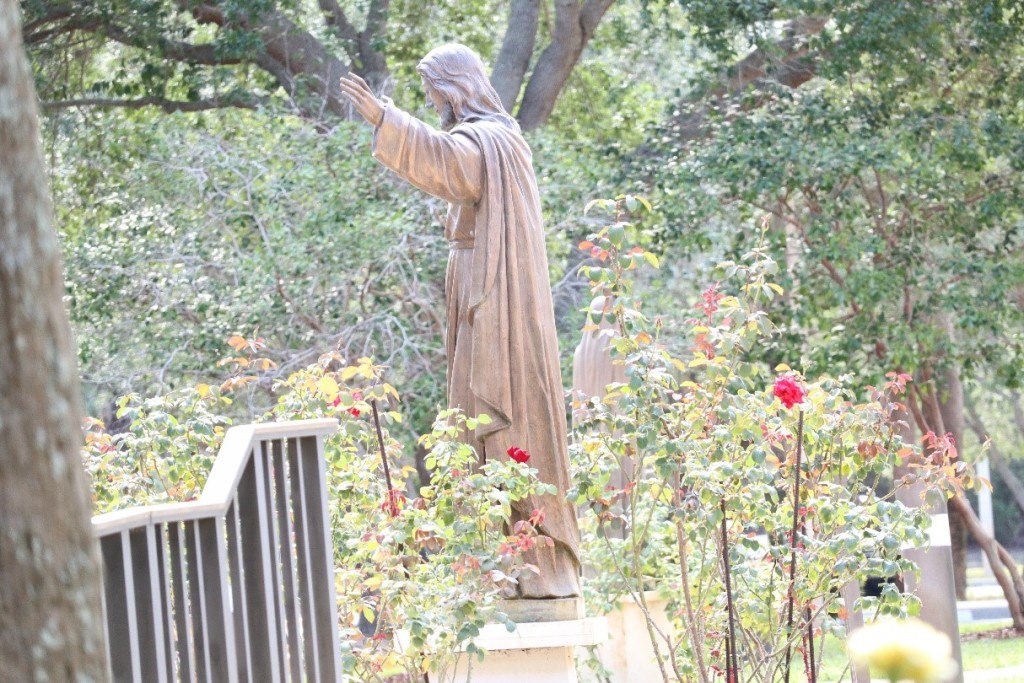