Many Names of Mary Queen of Peace and Our Lady of Victory, Mother of the Fallen 1 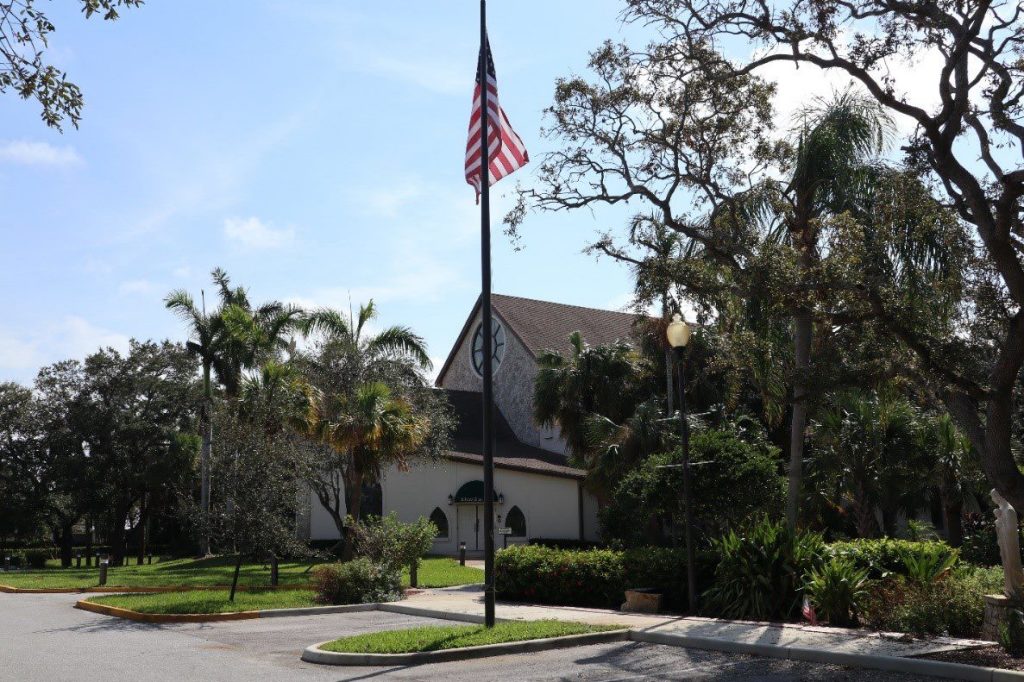 Our Veterans Pathway falls under the Protection of The Blessed Mother, and lies in the shadow of the American Flag. These last five weeks I have kept the flag at half past in honor of the over 60,000 souls, in our nation, who have perished in this pandemic. We honor all who have died and those who serve in so many ways 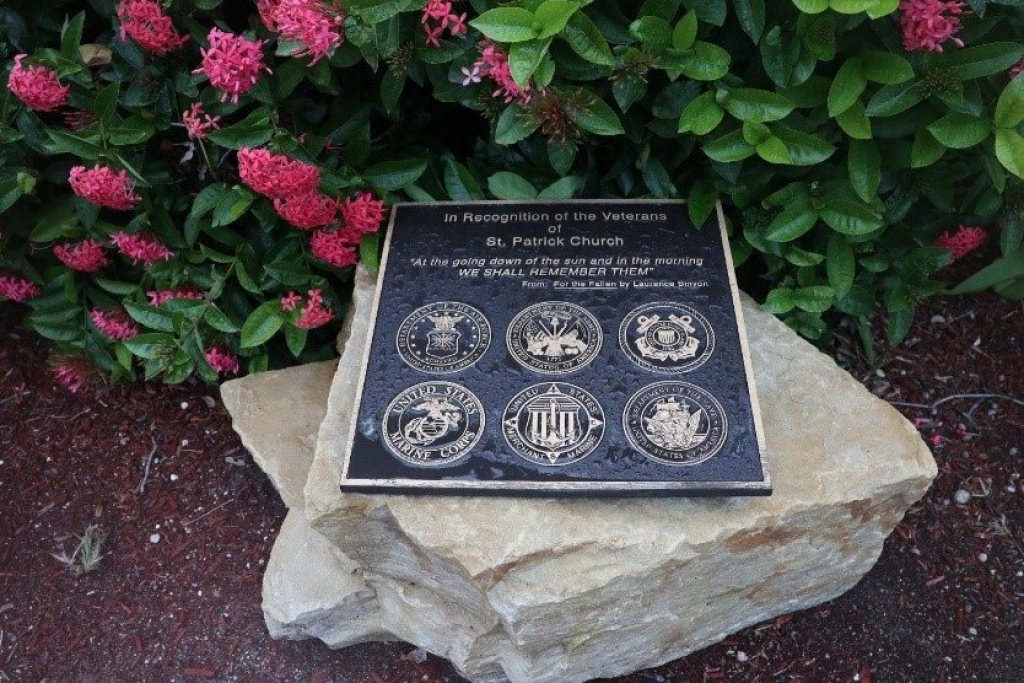 Our Lady Queen of Peace

It was just over 100 years ago, in 1917, when World War I was raging, that Pope Benedict XV added to the Litany of Loreto, the Litany of the Blessed Virgin Mary, the title and invocation “Queen of Peace.” This Pope of Peace desired that the Catholics of the world pray through Mary’s intercession as Queen of Peace for an end to the devastating world war.

Today, we invoke Our Lady as Queen of Peace to pray for us and for the world, for peace in our lives, our families, our communities, our nation, and our world. There is so much violence, terrorism, discord, wars and threat of war, in the world today. We need to pray for peace. The Church engages in the battle for peace through prayer since prayer opens the heart not only to a deep relationship with God, but also to an encounter with others marked by respect, understanding, esteem, and love. Prayer instills in us the conviction and courage to be peacemakers, to live the Beatitude of Jesus: “Blessed are the peacemakers, for they shall be called children of God.”

Peace is a basic attribute of God. It was through sin that the divine order of peace was disrupted. We read in the book of Genesis, soon after the original sin, the story of Cain killing Abel. Violence made its appearance in the world. The world experienced the shedding of blood and division. Later in the Old Testament, we read of the great promise of peace associated with the coming of the Messiah, whom Isaiah calls the Prince of Peace, as we heard in the first reading today.

In the Gospel of the Annunciation, we heard the great announcement of the archangel Gabriel to Mary that she would conceive and bear a son, the Son of the Most High. Gabriel told Mary that the Lord God would give her son “the throne of David his father, and he will rule over the house of Jacob forever, and of his Kingdom there will be no end.” The Kingdom of her Son, the kingdom of the Messiah, is precisely the kingdom of peace. Jesus is our peace.  He came and broke down the dividing wall of hostility among people, reconciling them with God. Jesus gave us the gift of peace, which is first of all reconciliation with the Father, and then reconciliation with our neighbors, our brothers and sisters throughout the world. He calls us to be peacemakers. Working for peace is part of His Gospel. 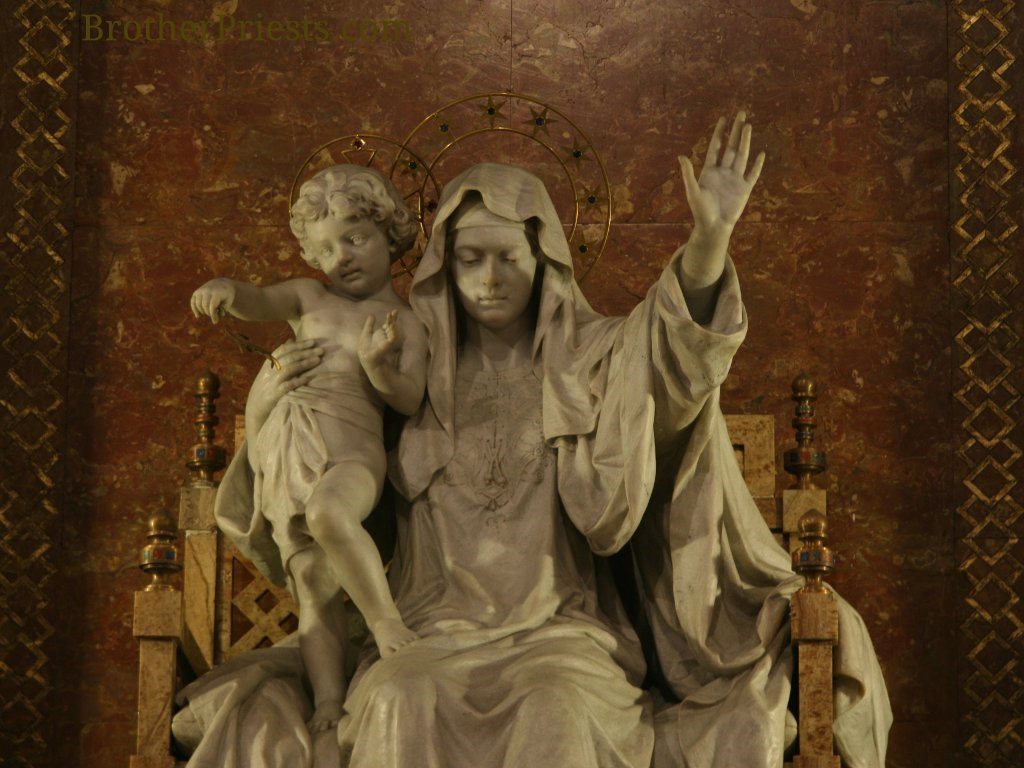 Sculpture of Mary Queen of Peace in the Basilica of Santa Maria Maggiore. Commissioned by Pope Benedict XV at the end of WWI. It shows Mary lifting her hand asking for a stop of war.

Peace is not merely the absence of war. It is the fruit of justice and love. We are all responsible for promoting peace: in our families and communities and in the world. Peace must first be deeply rooted in each of our hearts and then it spreads to our families and others. An authentic culture of peace can only grow in the world when there is respect for justice and when there is love in people’s hearts. Sadly, a couple weeks ago, we witnessed the opposite in the events in Charlottesville, Virginia. Hatred in people’s hearts leads to violence. In the world in recent times, it explodes in terrorism. Hatred among peoples leads to war. War is a failure of peace. As St. John Paul II once said, “war is always a defeat for humanity.”

It is good to remember today in our prayers the men and women of our armed forces. Legitimate defense justifies the existence of the military. They defend the security and freedom of our country, thus making an authentic contribution to peace. The brave men and women of our armed forces are called not to make war but to defend good, truth, and justice in the world. They are called to defend innocent lives and to defend our nation from acts of aggression.

Some of the most amazing people who work in the service of Christ’s peace are those who have seen the horrors of war.  They have witnessed the unspeakable and so they speak out to prevent it happening again. They challenge us to remember that the paying the ultimate price should never be taken for granted. They deep bonds of comradeship forged in fire and fury compel them to remind us that no one should be abandoned and forgotten

A PRAYER FOR THOSE IN THE ARMED FORCED

(A Prayer for their protection and wise judgement)

Father God, we pray for all those who faithfully

serve to keep, protect, and preserve justice, hope and love.

May you encircle them with protections, post angels to watch over

your sons and daughters as they face danger.

We pray that they would have great wisdom and judgement.

Help them to work as a team, and care for each other.

Lord, come, lead them in their prayers and answer them clearly,

ambassadors of justice, and bringers of hope.

May you guard their hearts with your love,

We ask all this in the wonderful name of Jesus