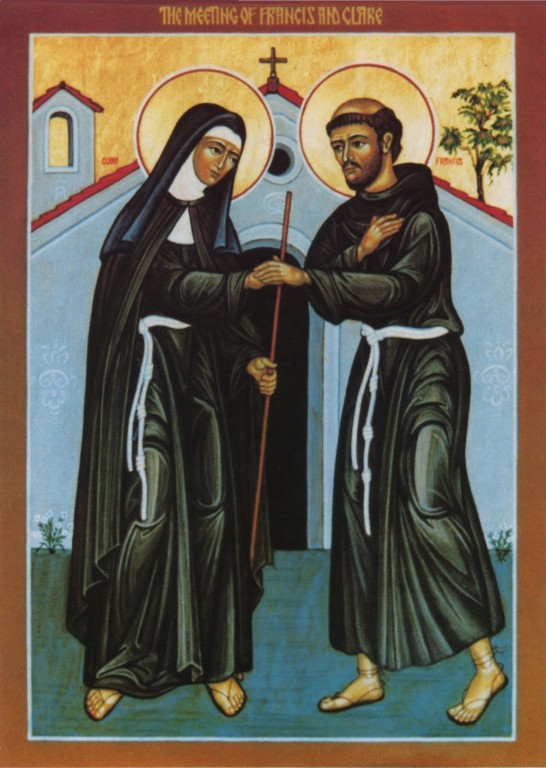 The extraordinarily profound understanding between Francis and Clare, which features so strongly in the Franciscan epic, does not come from “flesh and blood,” like that between Eloise and Abelard, or Dante and Beatrice (to quote two equally famous examples). If it had done so, it might have left some trace in the literature, but not in the history of sanctity. In one of Goethe’s well-known expressions, we could call the friendship of Francis and Clare an “elective affinity,” as long as we understand “elective” not only in the sense of people who have chosen each other, but who have made the same choice.

Antoine de Saint-Exupéry wrote that “being in love does not mean looking at each other, but looking together in the same direction.” Clare and Francis really didn’t spend their whole lives gazing at each other and feeling good together. They exchanged the fewest of words, probably only those reported in the sources. There was a tremendous reserve between them, so much so that at times the saint was affectionately chided by his brothers for being too harsh with Clare.

Only at the end of his life do we see this rigor in the relationship soften, and Francis visits his “little plant” more and more frequently in search of comfort and confirmation. As death draws near and sickness consumes him, San Damiano becomes his refuge, and it is at her side that he intones the Canticle of Brother Son and Sister Moon, with its praise of “Sister Water,” “useful, humble, precious and chaste,” which might have been written with Clare in mind.

They looked at the same God, the same Lord Jesus, the same crucified one, the same Eucharist, but from different “angles,” each with their own gifts and the sensitivity proper to a man and a woman: masculine and feminine.

St. Clare of Assisi was born in Assisi on July 16, 1194, as Chiara Offreduccio, the beautiful eldest daughter of Favorino Sciffi, Count of Sasso-Rosso and his wife Ortolana. Tradition says her father was a wealthy representative of an ancient Roman family and her mother was a very devout woman belonging to the noble family of Fiumi.

As a young girl, Clare dedicated herself to prayer. At 18-years-old, she heard St. Francis of Assisi preach during a Lenten service in the church of San Giorgio and asked him to help her live according to the Gospel. On Palm Sunday in 1212, Clare left her father's home and went to the chapel of the Porziuncula to meet with Francis. While there, Clare's hair was cut off and she was given a plain robe and veil in exchange for her rich gown.

Clare joined the convent of the Benedictine nuns of San Paulo, near Bastia, under Francis' orders. When her father found her and attempted to force her back into his home, she refused and professed that she would have no other husband than Jesus Christ. In order to give her the greater solitude she desired, Francis sent Clare to Sant' Angelo in Panzo, another Benedictine nun’s monastery.

Clare's sister Catarina, who took the name Agnes, joined her at this monastery. The two remained there until a separate dwelling was built for them next to the church of San Damiano.

Overtime, other women joined them, wanting to also be brides of Jesus and live with no money. They became known as the "Poor Ladies of San Damiano." They all lived a simple life of austerity, seclusion from the world, and poverty, according to a Rule which Francis gave them as a Second Order. St. Clare and her sisters wore no shoes, ate no meat, lived in a poor house, and kept silent most of the time. Their lives consisted of manual labor and prayer. Yet, they were very happy, because Our Lord was close to them all the time.

While serving as the leader of her order, Clare defended them from the attempts of prelates to impose a rule on them that more closely followed the Rule of Saint Benedict than Francis. Clare was so devoted and dedicated to Francis that she was often referred to as "alter Franciscus," or another Francis. She encouraged and aided the man she saw as a spiritual father figure, and took care of him as he grew old.

Following Francis' death, Clare continued to promote her order, fighting off every attempt from each pope trying to impose a rule on her order that would water down their "radical commitment to corporate poverty."

In 1224, an army of rough soldiers from Frederick II came to attack Assisi. Although very sick, Clare went out to meet them with the Blessed Sacrament on her hands. She had the Blessed Sacrament placed at the wall where the enemies could see it. Then on her knees, she begged God to save the Sisters.

"O Lord, protect these Sisters whom I cannot protect now," she prayed. A voice seemed to answer: "I will keep them always in My care." In that moment, a sudden fright struck the attackers and they fled as fast as they could without harming anyone in Assisi.

St. Clare became sick and suffered great pains for many years, but she expressed that no pain could trouble her. So great was her joy in serving the Lord that she once exclaimed: "They say that we are too poor, but can a heart which possesses the infinite God be truly called poor?"

On August 9, 1253, Pope Innocent IV declared Clare's rule would serve as the governing rule for Clare's Order of Poor Ladies. Two days later, Clare died at 59-years-old. Her remains were placed in the chapel of San Giorgio while the church dedicated to her remains was being built. At Pope Innocent's request, the canonization process for Clare began immediately, and two years later in 1255, Pope Alexander IV canonized Clare as Saint Clare of Assisi.

The construction of the Basilica of Saint Clare was finished in 1260, and on October 3, 1260 Clare's remains were transferred there and buried beneath the high altar. Nearly 600 years later, her remains were transferred once again to a newly constructed shrine in the crypt of the Basilica of Saint Clare. Her body is no longer claimed to be incorrupt.

The Order of Poor Ladies was officially changed to the Order of Saint Clare in 1263 by Pope Urban IV.

St. Clare was designated as the patron saint of television in 1958 by Pope Pius XII, because when St. Clare was very ill, she could not attend mass and was reportedly able to see and hear it on the wall in her room.

She is also the patroness of eye disease, goldsmiths, and laundry.

Clare is often pictured carrying a monstrance or pyx, to commemorate the time she warded off the soldiers at the gates of her convent with the Blessed Sacrament. St. Clare's feast day is celebrated on August 11.

Romeo and Juliet. Anthony and Cleopatra. When asked what our favorite love story is, we might quickly answer with such classic tales of passionate love affairs. Not many people would associate saints with a story of true love.

St. Francis of Assisi and St. Clare weren’t some religious Romeo and Juliet. Romance and physical attraction did not draw them to one another. The passionate love of God did.

Francis and Clare were born to wealthy families in 12th century Assisi in central Italy. Both lived in comfort until a calling from God changed their lives. Francis was the first to be changed. Through a series of dreams, he knew God was calling him to serve others. He realized he had a choice: live a life of comfort and wealth, or live a life of sacrifice and service to God. He chose the latter, and at the moment of that decision vowed to serve the poor and downtrodden and live a life of freedom in Christ. He dedicated himself to prayer, service, poverty and preaching to anyone who would hear him speak.

Clare was young, innocent and in love with life when she learned that Francis had decided to deny his possessions and leave the riches of youth behind. She sought him out, listened to him speak and learned how all things stirred him to the love of God, how he rejoiced in the beauty of God’s creation and yearned to share that joy and love with all he encountered. Francis taught Clare about real love, and she wanted to do the same for others.

Clare desired to join him in this simple way of life, imitating him not only because of his example but also because of his words that were filled with the love of God. His love of Christ moved her and lit a flame of love deep within her own soul. When she was 18 years old, she decided to do the same thing Francis had done. She left all that was familiar and safe to serve Christ alongside him.

With the help of friends who joined them along the way, they worked together to help anyone they met who was struggling and in despair. Francis and Clare knew the peace and security the poor and needy desired could be found in the unconditional love of God. The answer was in their hearts and souls, and they took every opportunity to share it with the people they encountered in their life.

Years later, nearing the end of his life, Francis was sheltered by Clare in a hut of branches in her church at San Damiano. She was his dearest love on earth and was near him when he passed from this world and met the Love of his life on the other side.

Somewhere along the way, we can forget what real love is. We can get caught up in the idea of love portrayed through movies and songs, and in the midst of it all, we lose sight of the source of all love when we celebrate Feb. 14 every year.

C.S. Lewis once said that we have a constant choice in love. We can choose which love comes first and which love we yield to. Francis and Clare made the choice to set aside human desires and love God with their whole hearts and souls, and in that love they enveloped one another.

Francis and Clare were lovers, though not in the same way lovers are viewed today.

They loved purely, without expectations and without demand. Francis and Clare made their lives a living sacrifice and will forever be united in their selfless love for others and God

This is different but like Francis & Clare it works 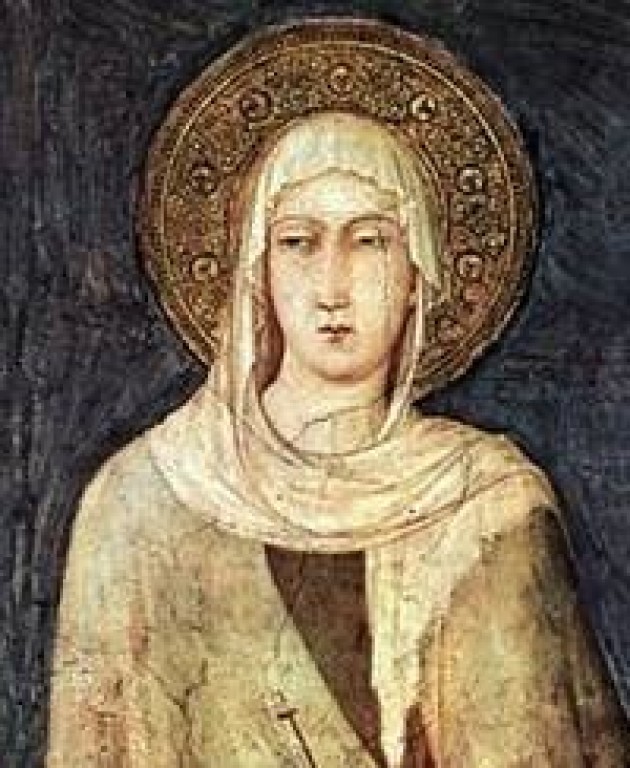 Jesus has come out of the tomb –
He still has the scars, but now they are glorious, with the glory of heaven.
Still looking at the Lord, I reach out and touch Him.
I hold the Lord – and I am held in His love.

Love enfolds.
It is no longer I that live, but Christ that lives in me.
I am secure in the Lord.
I can look out, now, through the Lord’s eyes.
I can see the world as He created it, in His mercy,
I can see my sisters and brothers with His love,
and I can worship the Father through the eyes of the Son
in the Love of the Holy Spirit.

(Prayers of St Clare of Assisi)